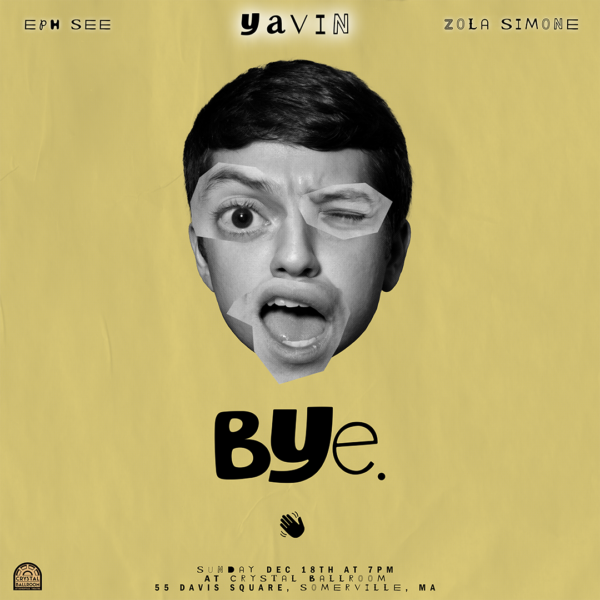 Join Yavin and friends as he says bye to Boston ahead of his move to Los Angeles! Tickets on sale now.

Yavin is unabashedly human. A celebration of the ordinary, wrapped up in pop music that’s extraordinary. Having grown up a short, nerdy, queer kid, he was never taken very seriously. With an upbringing like that, he learned how to remain in touch with the parts of his humanity that were often overlooked by other people, while being able to laugh at everything else. Fast-forward to him discovering songwriting in college, and that attitude towards life became his creative fuel. Whimsical, dramatic, & sometimes borderline over-sharing, you can always expect Yavin’s music to be nothing less than emotionally-charged pop fun.

What initially was a serious hobby in 2019, soon became a life passion as Yavin has been working tirelessly to create his own little corner in the pop music discussion. With features in Billboard Pride, Xtra Magazine, Vanyaland, Race Chaser Podcast, Pride.com, WBUR, doing a social media takeover for Grindr and more, he’s been garnering press buzz along with a solid 400,000+ streams to go with it. He’s also been nominated for multiple Boston Music Awards, including Pop Artist of The Year twice against the likes of Clairo, Frances Forever, & Sasha Sloan. In 2022 he served as an opener for VINCINT’s “The Getaway Tour” and joined the bill for “GAY BASH’D!” with headliners Cupcakke, Slayyyter and Detox. To top off the first half of the year, he took part in AT&T’s 2022 pride campaign. He has no plans of stopping any time soon, and with this kind of momentum, eventually nothing will be able to stop him either.