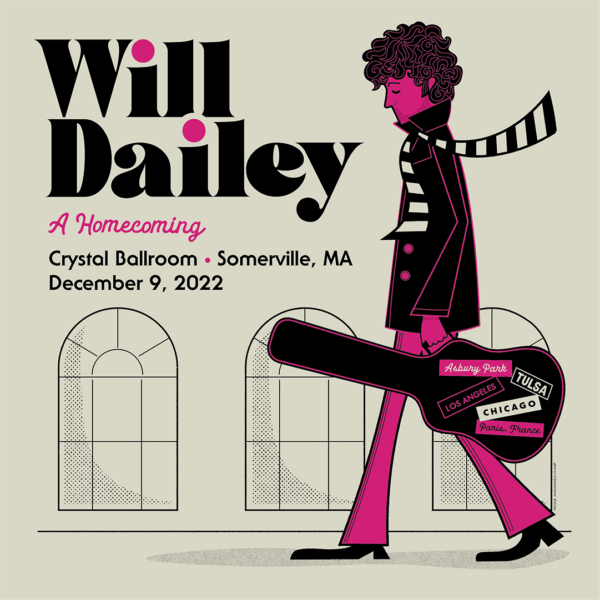 Will Dailey: A Homecoming

with The Loyal Seas

Boston’s own Will Dailey is an acclaimed independent recording and performing artist. His sound has been described as having a rich vintage vibe while having a firm appreciation of AM rock, pop and big hooks leading famed Rock journalist Dan Aquilante to call him “the real deal”.

This summer Dailey released his single “Easy to Be Around”, his first new music since “the before times” in 2019. “Easy to Be Around” shares an airy groove – but there’s a 68 second surprise attached to it. The single slides into a second song that lists the full credits from the instrumentalists to the cover artist and all the audio engineers in between. In an era of music history that’s ruled by algorithms, the double-single of sorts could be considered a risk., but Will Dailey disrupts industry norms – not the other way around.

Joining Will are The Loyal Seas (Tanya Donelly and Brian Sullivan).

For the last decade, trailblazing alternative rock figurehead Tanya Donelly — co-founder of Belly, Throwing Muses and The Breeders — has pursued meaningful collaborations with favorite artists and friends. The resulting work is by turns poignant, delightful and entirely surprising, melding folk, rock, pop and orchestral sounds. Her latest, The Loyal Seas, pairs Donelly with New England cult-favorite Brian Sullivan, who’s worked under the moniker Dylan in the Movies since the mid ’00s. A skilled singer, songwriter and multi-instrumentalist, Sullivan’s debut, Feel the Pull (2005), and follow-up full-length, Sweet Rebel Thee (2014), are each teeming with a lush, discrete form of alt-pop, Sullivan’s private mind garden translated as cinematic vignettes.